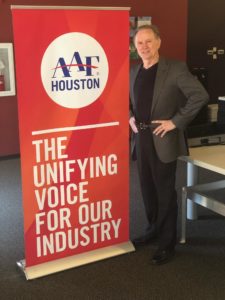 The mission of  Houston Advertising Federation (AAF-H) is to advance the advertising profession by supporting industry recruitment, education and promoting ethical self-regulation.

“This is a historic organization founded in 1911 and is one of the oldest service organization in Houston. AAF-H has a great heritage in our city and the American advertising industry. It was AAF-H that organized and sponsored the Better Business Bureau of Houston in the 1920’s.” said John Manlove. “I would have never dreamed, 45 years ago, when my agency was in a little one-car garage that one day we would be in a 15,000sf facility and that I would be Chairman-Elect of the Houston Advertising Federation. This is all a testimony to what a great city we live in.”

John Manlove Marketing & Communications is the oldest, one of the largest and one of the most award-winning ad agencies in the Houston Area. Started in 1961 it is a third-generation family owned firm that specializes in planning, creating and executing complex marketing campaigns.