Monthly Round Up April

Want to see what’s been happening recently in the news? 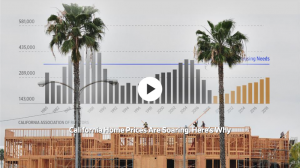 California is adding jobs faster than affordable places to live.

YOUTUBE ATTEMPTS TO EARN BACK TRUST OF ADVERTISERS (February 28, 2019) YouTube has updated its eligibility requirement for monetization. Following a string of brand safety controversies. They are pledging to implement stricter rules for video creators who intended to seek compensation via YouTube Partner Programs.

COMPANIES LEAVING CALIFORNIA FOR TEXAS (March 19, 2019) California is adding jobs faster than affordable places to live. These companies are heading to Texas with affordable housing and lower taxes. “This is an opportunity not only for Texas but Houston,” said John Manlove, CEO John Manlove Marketing & Communications in Houston.

SOME FACEBOOK ADS WILL REMOVE TARGETING (March 20, 2019) Facebook is removing age, gender and ZIP code targeting for housing, employment and credit-related ads as part of a settlement.

FACEBOOK ACCUSED OF AIDING BIAS IN HOUSING (March 29, 2019) Federal officials accused Facebook of unlawful discrimination by allowing certain regulated industries to target by race, religion and other factors. The housing industry is tightly regulated and the regulators have said that the media giant has violated the Fair Housing Act. “This in some respects is similar to the ‘shadow banning’ of certain political official that Google and Facebook have been charged with in the past,” said John Manlove, CEO of John Manlove Marketing & Communications in Houston, Texas. “In this case Facebook restricted who can view housing-related ads.”

AMAZON’S RISE IN AD SALES DENT GOOGLE’S DOMINANCE (April 5, 2019) Advertisers are starting to shift spending on search ads from Alphabet Inc.’s Google toward Amazon.com Inc. a sign of how the online retailer is capitalizing on becoming the top destination for consumers’ product searches. “Some of the largest media buys in world are driving the switch on behalf of their clients and most of the money going toward Amazon is coming from Google ad spends,” said John Manlove, CEO of John Manlove Marketing & Communications.

TEXAS HOUSE TO CONSIDER PRIVACY BILL (April 15, 2019) Texas House Bill 4390 could be brought up in the House. Unfortunately, as drafted the legislation would be very harmful for both businesses and consumers.

HB 4390 should be opposed because: